This week we look back to the development of Noel’s first high rise building in the Sunshine Coast- the Syrenuse Apartments. Visitors to Mooloolaba esplanade today will be familiar with the prominent building, with panoramic views of the Pacific Ocean.

However, in 1982 Mooloolaba was still developing, and like many beach towns when first developed for tourism, the Syrenuse Apartments received many objections to the development application. Thirty-two years later it was awarded “the Enduring Architecture Award” in 2014 and is now seen as a benchmark for development in the area.

Syrenuse apartments by Noel Robinson Architects was built in 1981. Its innovative slab and 6 x 6 grid meant the slender structure could provide fire protection while allowing full height glazing and connection to its view and aspect. Its organic form marked Mooloolaba as a contemporary destination at the time and it remains a benchmark for mid-high rise development. 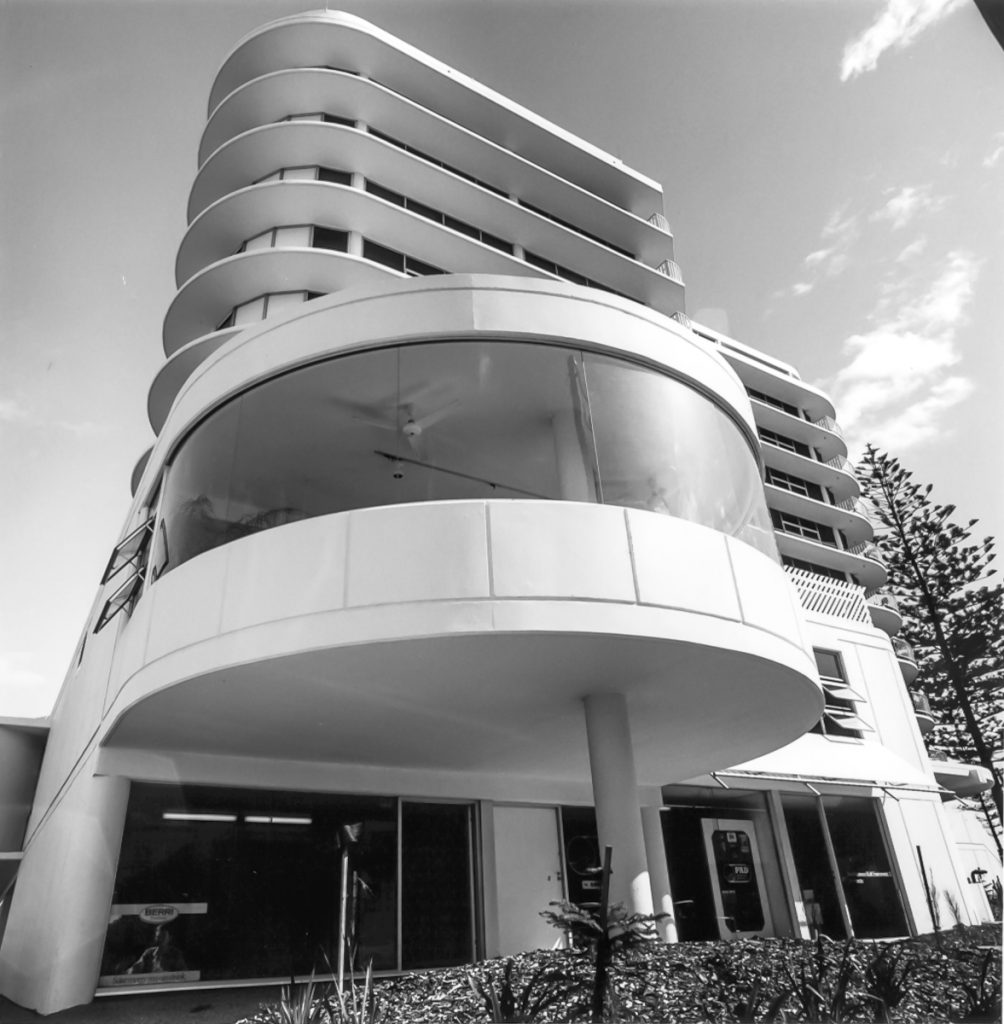 The following article extract was written by Michael Keniger about the Syrenuse in Architecture Australia in July 1982, and provides interesting insight to the design of the building and also the environment in which Noel Robinson was operating:

“… Further north, in the fast growing and rapidly developing region of the Sunshine Coast, the proponents and opponents of high-rise developments have been arguing their several causes. These usually revolve around economics and environmental impact and rarely concern the quality of development. It is tacitly recognised that most high-rise developments along this coast are crude in conception, construction and finish. This is seen as an almost natural outcome of the development pressures which are based on a quick return. The lie to this is given by Robinson’s first high-rise building “Syrenuse”, which is located on the most prominent corner in Mooloolaba where the Brisbane road climbs to meet the esplanade. The building has ten levels and contains six shops, two offices and sixteen luxury units. It is distinguished by the swinging curves of the cantilevered floor slabs and by its serpentine plan. This effectively reduces the bulk of the building’s form which is oriented at right angles to the line of the beach. The streamform shape recalls a variety of marine metaphors such as the stern of a liner or, with an eye to a more architectural reference Mendelsohn and Chermayeff’s De la Warr Pavilion at Bexhill.

The structural diagram is extremely simple but is more sophisticated than the basic frame and infill of most of the adjacent towers. It consists of a cage of circular concrete columns at six metre centres supporting two way spanning flat plate slabs with a continuous 1.5 metre cantilevered overhang. Wind bracing is given by a vertical spine linking the services and staircase shafts. The overhang provides both shade and a sufficient fire-break to allow a floor to ceiling glazed skin to be employed. Balconies occupy only part of the length of the resulting ledges because the regulations concerning site coverage prevented the whole of the cantilever being utilised.

The building is finished in a white paint, although requiring continual maintenance, does serve to mask some of the surface irregularities that tend to distinguish concrete as a material. The internal level of finish is high with imported tiles, wool carpet, silver ash veneers and Vola taps combining with taut detailing to appeal to the upper end of the unit market. Surprisingly the units are not air conditioned, but their narrow plan profile and general exposure does capitalise on the coastal breezes. Even so, there is only limited protection from the fierce western sun and the addition of some form of external screening along the western face would seem an obvious modification.

Until recently, Mooloolaba was a sleepy resort town with an air of rough and ready, take-it-or-leave-it casualness that gave a holiday on the coast north of Brisbane its special flavour. It has since been overwhelmed by the ubiquitous canal estates and holiday unit blocks. This being so, there was considerable public opposition to “Syreneuse” partly because of the prominences of its site and partly because of its proximity to the historic Norfolk Pines that line the footpath at this point. These objections were overcome by extended negotiations with the council. Models were employed to contrast the architectural qualities of the scheme with the raw block massing that was the logical outcome of the various regulations and constraints applied. The models also demonstrated that the building satisfied the council’s stringent criteria limiting overshadowing of the beach.

The building itself has been well received locally and is often cited as an example of responsible development. As such it is less a building that reacts to or draws from a context that one that sets out to define and establish a new context. Its success can be measured both by the wholesale borrowing of its imagery by other recent developments in the area and by the amount of work that the scheme brought in train.

Have you stayed at the Syrenese when holidaying at Mooloolaba? We’d love to hear about your experience.