This design solution for the Flinders Street Station was an open competition where the Noel Robinson Architects team responded to the strong contextual influences on the site, while respecting the significance of the existing historic Flinders Street Station building.  The concept recognised a need to balance the commercial imperative with the technical transportation issues for the long term viability of the precinct.

The new buildings were designed to sensitively respect the proportions, massing, heights and rhythmic form of the existing heritage building by creating a soft undulating sculptural structure embracing the rail lines below and enhancing the open space to the west.

The larger built-form element to the west contains a proposed hotel and commercial development.

This sculptural form complemented the domed tower of Flinders and Swanston Streets.

The proposed roof form and enclosing skin of the new building replicated a fabric being deliberately draped over the existing railway infrastructure and open space to the west.

The southern elevation also creates an undulating response to the Yarra River allowing the heritage building expression above the built form to not be compromised. 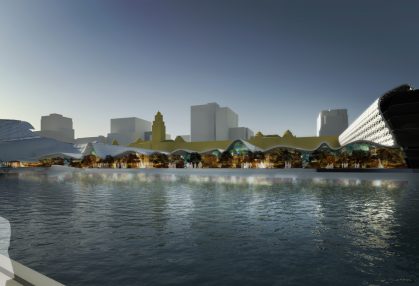 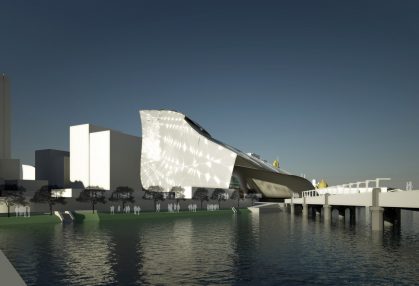