Is the best house in Noosa this $18 million beach shack?

As it happens, the six-bedroom, nine-bathroom property with whole-floor entertainment zone and forecourt pool completed last year snuggles into sand dunes above a Noosa beach. 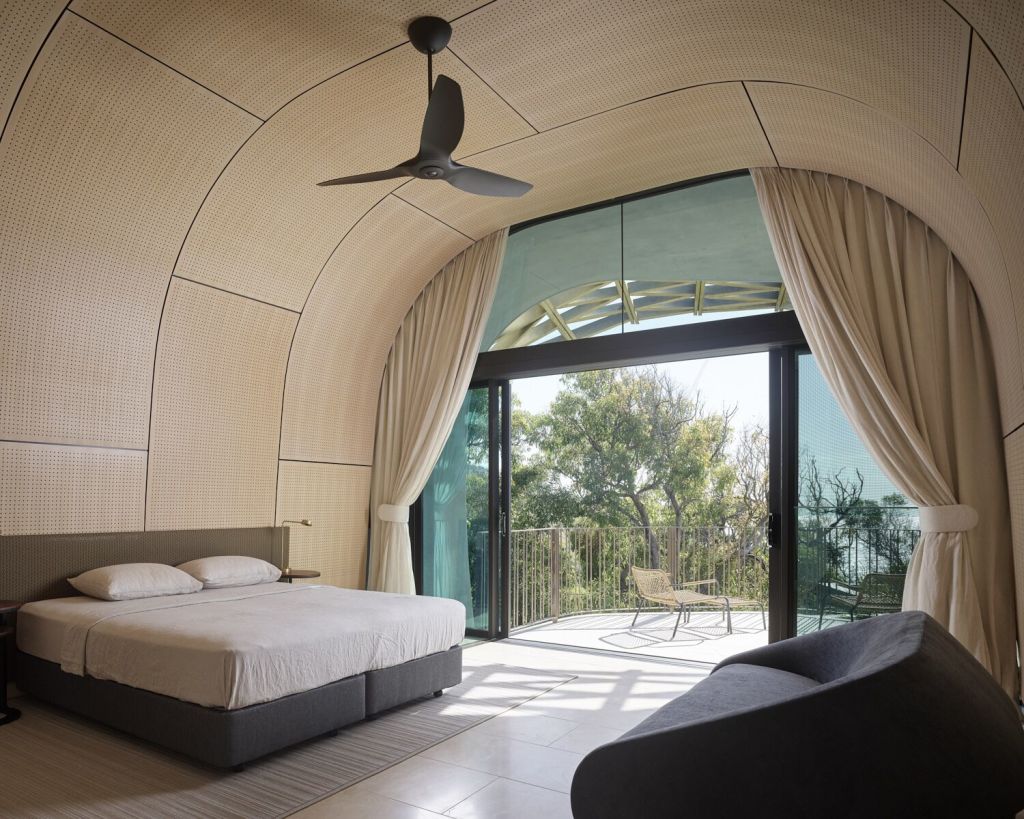 The home is right next to the national park. Photo: Scott Burrows

It now ranks as Queensland’s most expensive coastal property after it cost almost $18 million and three years to build. And that price doesn’t factor in the land that the architect of many amazing Queensland properties has no hesitation rating as “one of the best on a hectare in eastern Australia”.

Noel Robinson, the respected veteran and Sulman Medal-winning Brisbane architect who last year also completed that city’s tallest building, Skytower, knows it was “not an easy house to build”.

“But it’s extraordinary. Marvellous,” he says. “An extraordinary thing to have happened. We work all over the world but when you have a client thinking on the same wavelength and who doesn’t have budgetary restraints you can really let your hair down.

Having learnt all of that, it may surprise you to know that the beach house is the occasional holiday venue for a single Swiss businessman, who has been coming to Australia for three or four months each year for 15 years. “I don’t like the European autumn,” Evgeny Skigin says.

It may further surprise you to learn that, after years of stalking and then securing the title to the parcel on the edge of Noosa National Park – “a beautiful block of land” – and for which he paid $4.5 million, Skigin found Noel Robinson Architects (nra-co-lab) and gave them a brief for “a minimalist beach shack”.

Related: The Bells Beach Monopoly house built for the bush and the surf
Related: This beach house at Bundeena replaced an asbestos-ridden cabin
Related: The refined coastal holiday house all about luxury without being suffocating

In light of what emerged that sounds like a joke. But Skigin was after a house that would only be visible from the Sunshine Beach below, and would look more like a landscape than a building from every other angle. 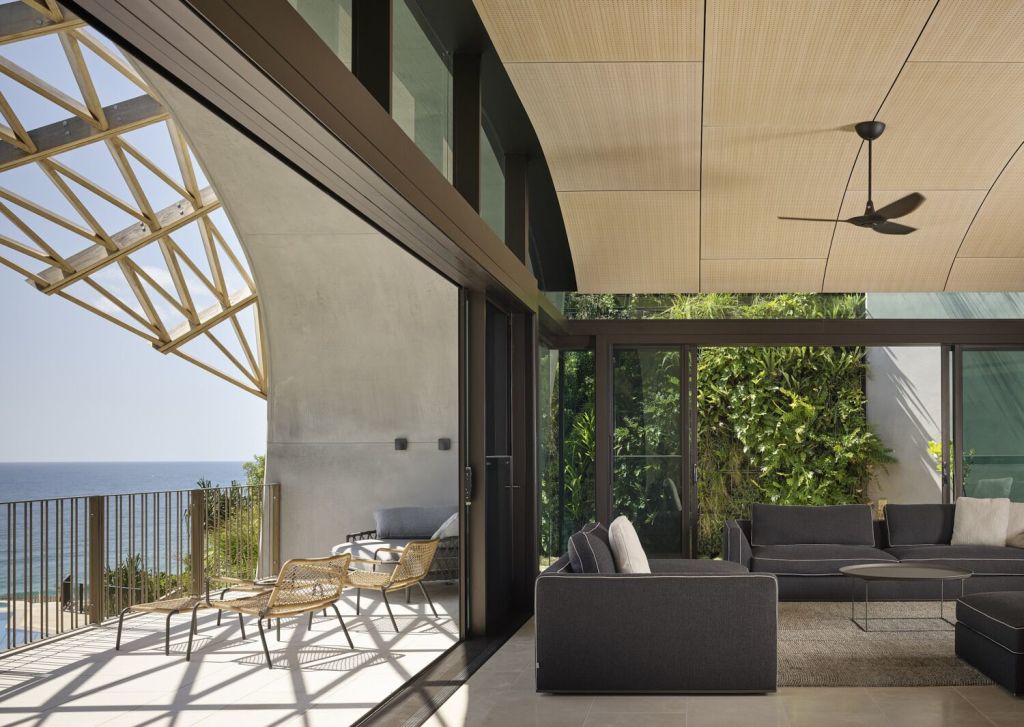 The brief was for a minimalist beach shack. Photo: Scott Burrows

He wanted it to have a level of intrigue and to carry the characteristics of the national park into the house. Thus the green roof that is already planted with native grasses and climbers that will continue to thicken and drape so the building will be increasingly veiled by nature.

“Plants are the best decoration,” says Skigin who, among many European business endeavours, manufactures Hempcrete building materials that have super green credentials and line many of the interiors of his fantastic shack.

“No paintings impress me as much as nature.”

Building in the sand-dune context required serious engineering and, says Robinson, “a massive excavation with piles being driven down three storeys”. The domes “that are all different shapes and dimensions because of the different room sizes and orientations” resulted from the client wanting interior spaces to be column-free.

As airy and minimally luxurious as are all the interiors that look north-east to the Pacific from what the architect refers to as the “concrete formed shells”, and as original as that remarkable facade appears when glimpsed from the sands below, Robinson designed the entry approach to appear as a sort of abstract dune curvature. 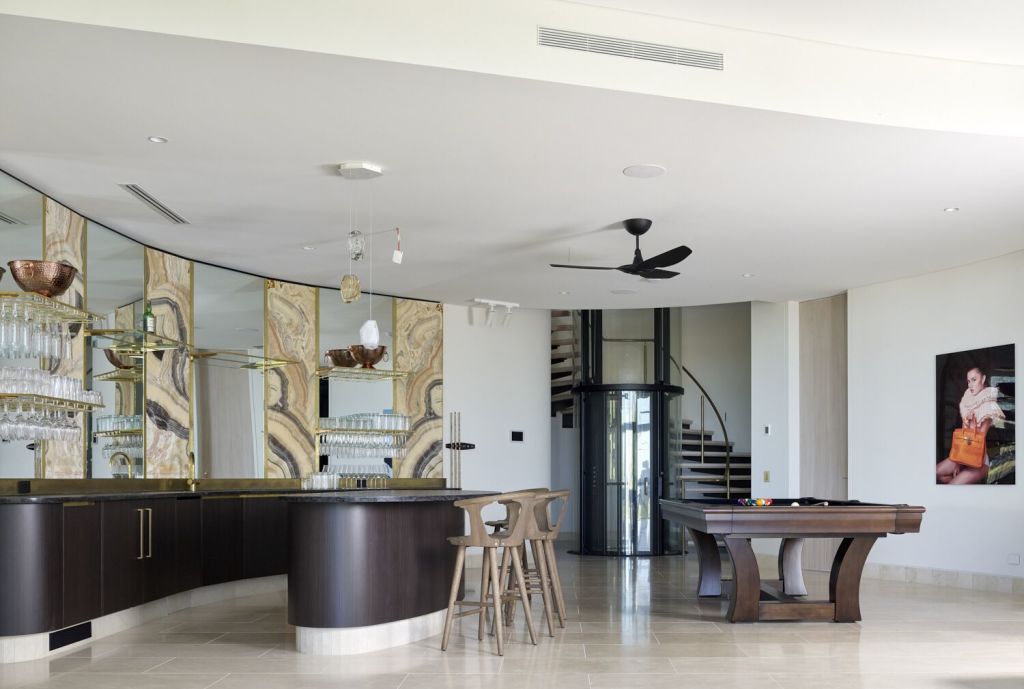 Formed in stepping-back bands of Corten steel that constitute yet more planter boxes, “we wanted it to feel totally different to the front of the house. With the landscape coming down the edges, it looks like a dune dome.”

The counter-pointing squared shape of the three-metre deep portal that leads through to the large pivot front door is “simple”, Robinson reckons. “You wonder, ‘What’s behind the door ?’ And it gives you a sense of surprise when you get inside.”

As a statement home of such amazing situation and appointments (and that will be a rental when the owner is not in his house), this new residence was always seeking to be different. Robinson says when he spent long hours there, watching kookaburras and monitor lizards, he experienced it as “soft. There are very few hard edges.”

Skigin, who otherwise lives in a small apartment in Switzerland, also finds that “hearing only the ocean and the birds is just an amazing experience”.

“I wanted it to be organic. And even when you look at it from the beach you don’t actually see much of it because of the green roof.

“I wanted to be respectful to the land.”