Airport hotel project on the runway and set for takeoff

In today’s Courier Mail- Gold Coast Airport Hotel is one step closer with the conclusion of the public consultation for the hotel. 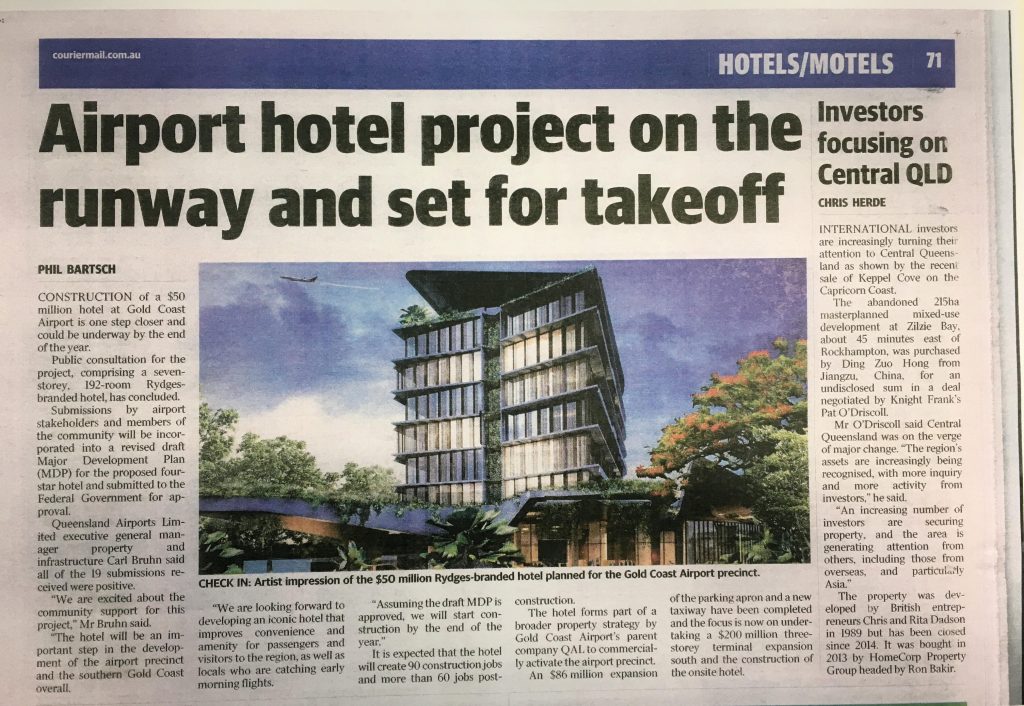 Construction of a $50 million hotel at Gold Coast Airport is one step closer and could be underway by the end of the year. Public consultation for the project, comprising a seven storey. 192-room Rydges branded hotel, has concluded.

Submissions by airport stakeholders and members of the community will be incorporated into a revised draft Major Development Plan (MDP) for the proposed four star hotel and submitted to the Federal Government for approval.

Queensland Airports Limited executive general manager property and infrastructure Carl Bruhn said all of the 19 submissions received were positive. “We are excited about the community support for this project,” Mr Bruhn said. “The hotel will be an important step in the development of the airport precinct and southern Gold Coast overall.” “We are looking forward to developing an iconic hotel that improves convenience and amenity for passengers and visitors to the region, as well as locals who are catching early morning flights.

“Assuming the draft MDP is approved, we will start construction by the end of the year”. It is expected that the hotel will create 90 construction jobs and more than 60 jobs post construction.

The hotel forms part of a broader property strategy by Gold Coast Airport’s parent company QAL to commercially activate the airport precinct. An $86 million expansion of the parking apron and a new taxiway have been completed and the focus is now on undertaking a $200 million three-storey terminal expansion south and the construction of the onsite hotel.